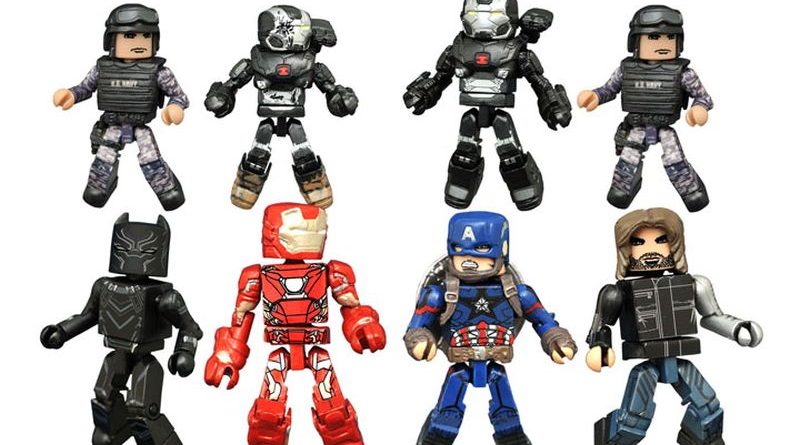 Batman fans also have a new metal Batmobile bottle opener to pick up this week. It’s based on the Batman: The Animated Series design and rings up at $18.00.  Check out the photos and full press release below.

Civil War Breaks Out at Your Local Comic Shop!

The #1 movie in the world is Captain America: Civil War, and the first assortment of Marvel Minimates based on the film is hitting comic shops and specialty stores this week! Marvel Minimates Series 66 is dedicated entirely to the latest Marvel Studios release, and features four different two-packs, showcasing both sides of the sprawling superhero conflict.

The available two-packs include Captain America with Winter Soldier, Iron Man with Black Panther, the comic shop-exclusive War Machine with a Raft Guard, and a rare, one-per-case variant two-pack with a Battle-Damaged War Machine and a Raft Guard. Each Minimates mini-figure stands 2″ tall with 14 points of articulation, and features fully interchangeable parts. The suggested retail price for a two-pack is $9.99, and your local retailer can order a case of 12 using item #JAN162251.

Also in stores this week: the Batman: The Animated Series Batmobile Metal Bottle Opener! One of the most iconic redesigns to come out of the landmark animated series was Batman’s sleek, elongated Batmobile, and now you can hold it in the palm of your hand! This approximately 4″ long metal bottle opener has magnets in the tires to keep it on your refrigerator or Bat-armory when not in use. With a suggested retail rice of $18.00, this product uses item #JAN162243.