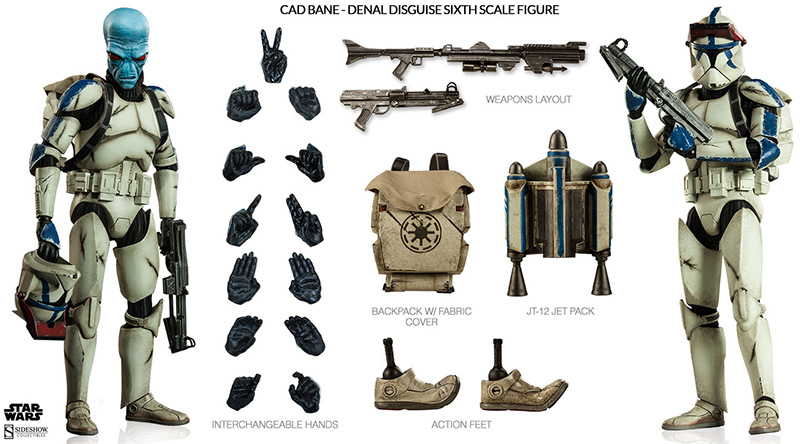 The pre-order for Sideshow’s Cad Bane in Denal Disguise is now live on their site.  The Sideshow exclusive release includes a 501st Legion Denal figure stand while both versions include 13 pairs of hands, two sets of feet, both a jet pack and backpack and DC-15A and DC-15S blasters.

The figure is scheduled for a February 2015 release and both the regular and exclusive versions are priced at $149.99 with Sideshow’s payment plan available.

Normally I don’t add opinion to these pre-order announcements but I’m going to take Sideshow to task a little on this release.  It’s not so much Cad Bane in Denal disguise as it is Denal with, oh by-the-way, here’s a Cad Bane head.  They didn’t even include a holocron accessory which is what the story arc from The Clone Wars centered on.  Ultimately this is just another way to do a Clone Trooper while trying to drive a few sales from collectors that are weary of more armored characters.  I’d much prefer more OT armored characters like Scout Troopers, TIE Pilots and AT-AT Drivers over more PT or Clone Wars troopers and why haven’t they finished off the Empire Strikes Back bounty hunters with Dengar, Zuckuss and 4-LOM yet?  While it was nice to see R2-D2 come up for order and the Han and Luke Hoth releases were welcomed, I’d like a little more diversity out of Sideshow.