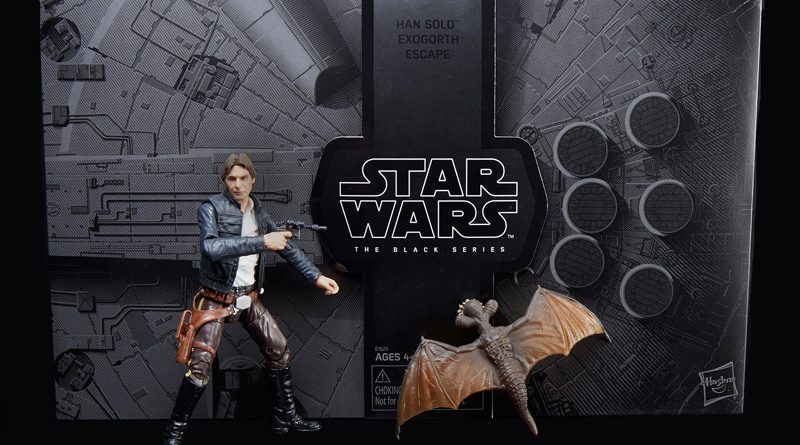 Along with the Centerpiece set, EW.com had the announcement of a Han Solo Exogorth Escape Black Series exclusive for SDCC. The set includes Han Solo in his Star Wars: The Empire Strikes Back outfit and includes a mynock, breathing mask, and packaging that slides open to show Han in the entrance ramp to the Millennium Falcon. The set will retail for $34.99 during San Diego Comic-Con and online at HasbroToyShop.com after the show. Pics and the press release are below.

Kids and fans alike can imagine the biggest battles and missions in the STAR WARS saga with 6-inch scale figures from THE BLACK SERIES! With exquisite features and decoration, this series embodies the quality and realism that STAR WARS devotees love. These HAN SOLO and MYNOCK figures are carefully detailed to look like the character and creature from STAR WARS: THE EMPIRE STRIKES BACK, featuring premium detail and multiple points of articulation. Includes figure, exclusive creature, and three accessories. The STAR WARS: THE BLACK SERIES HAN SOLO AND MYNOCK Figures will be for sale at San Diego Comic-Con 2018. Limited quantities of this item will be available at select conventions and select online retailers after the convention in the relevant market (including HasbroToyShop.com where available). Good while supplies last.