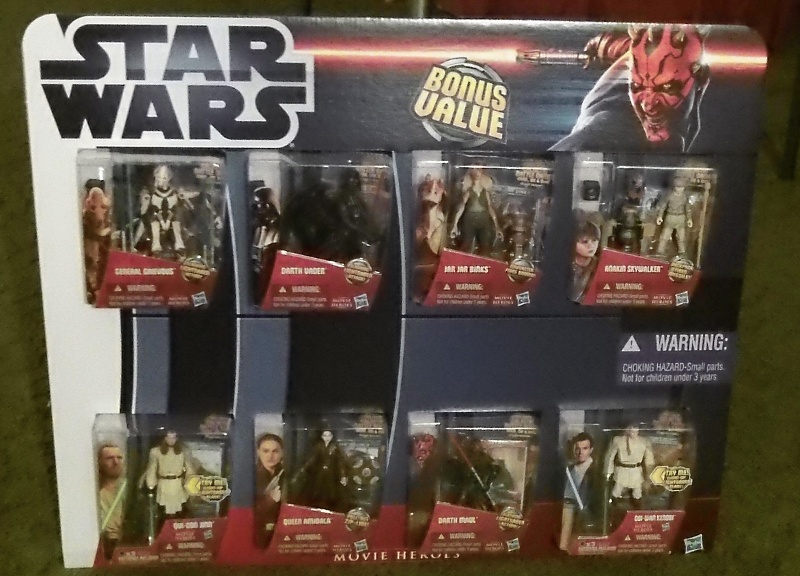 There weren’t a lot of Black Friday deals that I was interested in this year but the two best were probably the Toys-R-Us Class II 2-packs for $20 and the Walmart 8-packs of action figures.  I had already picked up the Mandalorian Assault Transport & Anakin’s Jedi Starfighter ahead of the sale, didn’t want to take a chance, but did stop at Walmart today and ended up with one of their exclusive figure packs.

There was a good mix of figures in the sets.  The Clone Wars packs had figures such as the first Ahsoka, Shaak Ti, R7-A7, Quinlan Vos, Undead Geonosian, Boba Fett, ARF Trooper, Kit Fisto and Pre Vizsla.  For Saga Legends, you could find Snow Troopers, Space Troopers, Snowspeeder Luke Skywalker and various Clone Troopers among others.

My favorite find, however, involved the Movie Heroes packs.  One pack included the second wave of figures; Obi-Wan Kenobi and Qui-Gon Jinn with light-up lightsabers, Queen Amidala, Jar Jar Binks and Anakin Skywalker.   Darth Vader, Darth Maul and General Grievous rounded out the set which made for a great mix of heroes and villains.

I’ve seen some reports that not all Walmart stores had a large selection of packs so if you didn’t find what you were looking for with your first stop, if you have a second store close by it might be worth a look.

Along with the Star Wars sets were joined by 8-packs of Avengers and Marvel movie  figures and our store didn’t have as big of a selection of those.  Not sure if they sold or just had a smaller assortment to start with.  However, there were still some good figures to be found including the Warriors 3 from the Thor line and comic versions of War Machine and Whiplash along with multiple versions of Iron Man, Captain America and Loki.

One deal that I don’t recall seeing was for a box of Lego bricks for $15.  The set of 650 bricks included an assortment of bricks, plates, wheels and other shapes to build houses, cars and whatever else you could think of.  At only $15, that works out to just over $0.02 per piece which is incredible for Lego.

While not on sale, I did spot the 3rd wave of Movie Heroes figures at Target and the light-up Darth Vader is really nice but the Snowspeeder Luke Skywalker may be the best deal with his included retractable backpack.  You could match that up with your Hoth AT-AT and have a really neat time playing.

I stopped at Toys-R-Us on Wednesday night and ended up buying the new Vintage Collection Millennium Falcon, but didn’t go to the store today.

There are still online sales going for the weekend and some stores will be running “Cyber Monday” sales so keep your eyes peeled.  With Christmas a month away, there will be lots of sales and opportunities to pick up some cool collectibles for good prices.