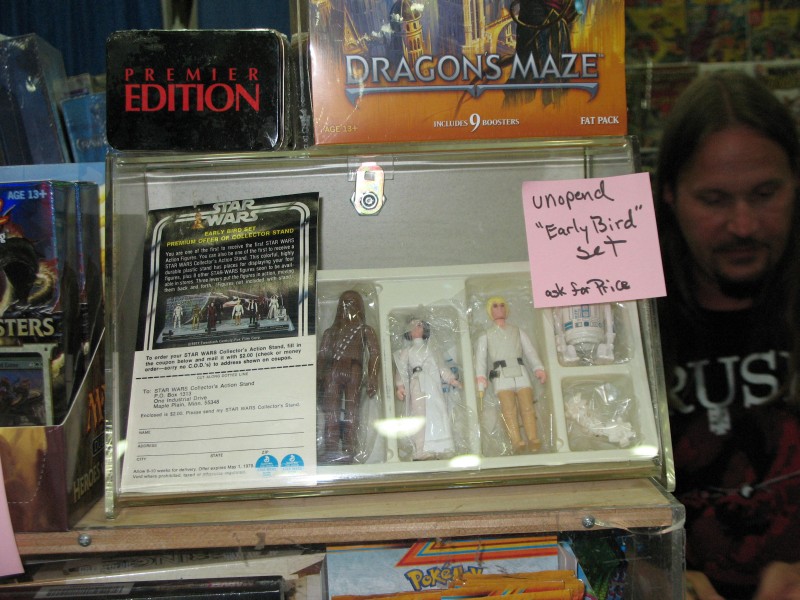 The Baltimore Comic Con has been on my radar for the last year or two, I kept hearing good things about it and this year it was finally time to go.  That was a very good decision.

I think the two main things that stuck out when I first hit the dealer floor were that there was a good mix of comics and collectibles and that Artist Alley was incredible.  Unlike other shows, Wizard World for example, Baltimore Comic Con sticks closer to the comics and collectibles surrounding them rather than expand into the multimedia realm with multiple autograph guests.

The one possible exception to that was the appearance of Kevin Smith, Jason Mewes and the personalities from Comic Book Men.  Saturday saw two panels featuring the View Askew crew with the first hour and a half being a Q&A with the Comic Book Men and the second being a viewing of Smith’s new animated film, Jay and Silent Bob’s Super Groovy Cartoon Movie, followed by Q&A with Smith and Mewes.

The movie was hilarious, extremely politically incorrect and exactly what you’d expect from the mind of Kevin Smith.  The Q&A sessions from both the Comic Book Men and Smith and Mewes panels ranged from general comic questions to movies to how to grow a podcast following.  I wasn’t able to stay for the whole session with Smith and Mewes, but the handful of stories they told were hilarious and solidified my respect for them both.  I was surprised by the Q&A at the Comic Book Men panel, however, as they had some fun insights to comics and movies and several fun stories about actually working at The Stash comic book store.  The humor on the show seems to be genuine as they were all hilarious in person which made the panel extremely fun to sit through.

If you saw my earlier post featuring cosplayers then you get an idea of how passionate the fan base was that attended the show.  Both days of the convention were well attended and we did see a report that this year’s attendance was a record.  It was announced during the course of the weekend that the 2014 show will expand to three days by adding Friday to the lineup.  But even though there was a huge attendance, the show didn’t feel too full to move around in.  Navigating the aisles was easy and even when people paused for photos of cosplayers, it didn’t hold things up for long.

I didn’t attend the show with a list of things I was looking for which seemed to make it more fun to look through the booths just to see what could be discovered.  The majority of the toys and collectibles at the show centered around comic books with Marvel and DC superheroes being well represented.  Video games, movies and television shows were not left out, with Doctor Who having a large presence.  Mixed in with Hasbro and Mattel superhero action figures were releases from Neca, McFarlane, Toy Biz, Hot Toys and others.  There were not a lot of vintage toys but we did spot a few nice Star Wars items including a sealed Early Bird kit and some 12″ figures in various states of completeness.

Comics were a large draw and you could find back issues for as little as $0.50 to hundreds (thousands?) of dollars.  Trade paperbacks and graphic novels were around, sometimes for up to half off, and several booths had the latest variant covers from the likes of DC and IDW.  Silver and Golden Age comics were on the floor for those in the market and there were at least three booths that had original comic artwork available for sale.

Several small press comic publishers, including IDW and Valiant, were at the show as were artists working for them.  Several big names in comics, including Neal Adams, Mark Bagley, Adam Hughes, Mike Mignola, Jim Starlin and Herb Trimpe were also on the floor and had artwork available or were signing books.  Artist Alley was so full of talent that it was hard to narrow down your choices if you were looking for a sketch or a print.  What was incredible, however, was that it seemed most all of the artists had people visiting their booths and purchasing items.

The Baltimore Convention Center was laid out well for a show this size.  The show floor was on the ground while the third level hosted the panel rooms.  Other than a few small improvements in communication for line management, the event organizers did a solid job of keeping things moving.  There were volunteers and staff all over the center if you had a question and picking up badges was a breeze.  The Convention Center, being downtown, is also centrally located for plenty of non convention shopping and dining.  We had lunch across the street on Sunday and even with an Orioles game kicking off, we had no problem getting seated, served and back to the convention in short order.

If you live on the East Cost and are looking for a fun, laid back convention to attend, I can highly recommend the Baltimore Comic Con.  This is especially true if you love comic books and the artists that work on them.  The list of talent at the show was very impressive and can only believe it will get better in the future.