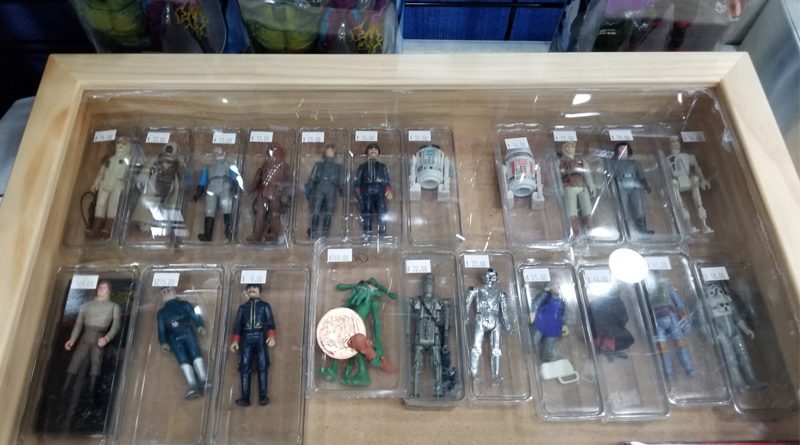 We missed the last two years of Baltimore Comic Con and this year it was a priority to attend again. The convention is a decent size with an incredible Artist Alley, a large selection of popular comic artists and writers, interesting panels, and a large and diverse selection of vendors. Depending on your goal for the show, it’s possible to see everything on the main floor in one day, but we recommend attending all three days to give yourself time to find the hidden gems of the show.

We’ve mentioned Artist Alley during our previous visits to the show and we want to point it out again. There were so many talented artists in attendance that no matter your taste in art, you could find something to enjoy. Not all of the art was on paper or canvas, there were quite a few vendors with 3d artwork from 3D printed pieces to handmade pieces of metal or mixed media. Many artists were promoting their own comics and graphic novels while others had prints of artwork they’ve done and many were taking commissions throughout the convention.

Frank Miller was the 2017 Guest of Honor while Amanda Conner, Jimmy Palmiotti, Tom Palmer, Walt and Louise Simonson, Neal Adams, Billy Tucci, and Mark Waid were among the bigger names in comics that were also at BCC. Besides meeting fans during the weekend, many of the artists were involved in panels during the event. But above all, BCC continues to make it easy to meet the artists and interact with them.

We attended three panels over the weekend (see our Baltimore Comic Con coverage) and were impressed with the media guests this year. The layout of the Ballroom was well done with a large screen for those further back from the stage and the amount of time given to fans for the question and answer period was a lot longer than we’ve seen at other shows. We’re not sure if this was done two years ago or not, but this year all of the panels we attended in the Ballroom had interpreters for the hearing impaired. We haven’t noticed this at other conventions, even on the larger stages, so we commend Baltimore for providing that service.

As we mentioned, even for the larger panels in the Ballroom, it’s easy to walk up right until the panels start and still find a seat. That’s a main selling point for us, access, and BCC is as good as any show we’ve been to. It’s a nice balance of excellent guests and attendance that makes this show so much fun.

The vendor area of BCC had a wide range of things to buy. Lots of comic books and graphic novels ranging from $1 bins and $5 trades to high-priced graded Gold and Silver Age books. Funko Pops! had a big presence but so did vintage video game consoles and games. There was plenty of modern Star Wars toys but we also found several booths with good selections of loose and carded vintage Kenner offerings. A few tables had vintage G.I. Joe A Real American Hero toys but having a sharp eye paid off when we spotted some vintage 12″ Adventure Team accessories in a box at one booth.

There was an excellent selection of superhero figures from various manufacturers including Hasbro and Mattel, statues and busts, and foreign items from Bandai. We spotted S.H. Figuarts toys at several booths, not to mention 1:6 scale Hot Toys items, showing that imported action figures have a market here. Blind boxed collectibles could be found in quite a few booths and t-shirts and clothing were also popular.

And, of course, there was lots of amazing art to be had in Artist Alley.

We planned to start our day a little later on Sunday and it worked in our favor as the only glitch we know of for the weekend happened with a small grease fire in the kitchen area early that day. The floor had to be evacuated and that pushed the panel schedule for the day, but from what we could see, it was handled well by the BCC staff.

We missed Baltimore Comic Con and were glad to be back this year. It’s a very accessible convention with a lot of talented artists and comic writers in attendance. If you’re on the East Coast and are looking for a fun show to go to, we highly recommend Baltimore Comic Con.