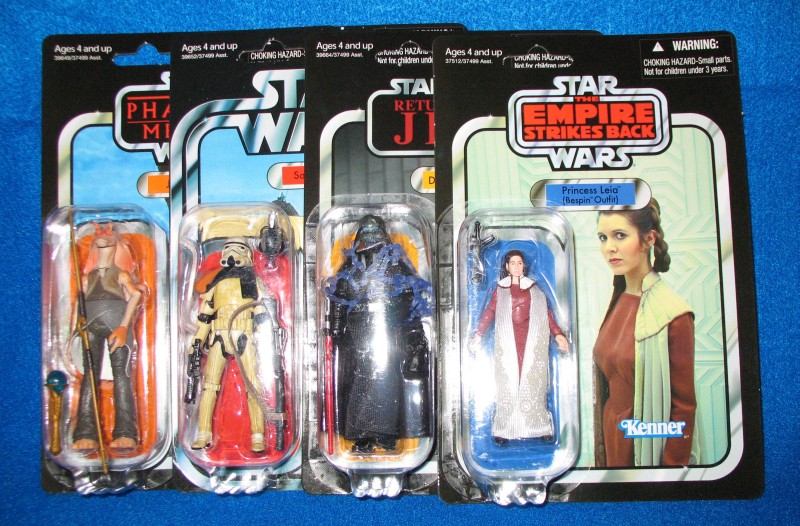 Toys-R-Us offered two excellent coupons to RUs Rewards members yesterday; Buy One, Get One 75% off on Star Wars action figures and toys and $10 off a $50 purchase, any toy line.  With those in mind, I took a drive down to the Elmira/Horseheads area here in NY to see what I could find.

I stopped in TRU first and was a little disappointed in the Star Wars selection.  Although I wasn’t expecting to find the new Speeder Bike, which is just starting to hit, I was looking for the Lost Line of Vintage Collection and was hoping for the exclusive multipacks.

The Lost Line wasn’t there and I’m guessing never will be, the pegs were stocked with probably two dozen of The Phantom Menace wave figures from back in February.  There wasn’t any better news for Clone Wars which had only a few of the Movie Heroes packaged Obi-Wan and Anakin figures stocked in front of Shadow of the Dark Side packaged figures from early 2011.  Movie Heroes/Saga Legends were also older releases, with the newest stuff also from that February release for The Phantom Menace.

I didn’t find the Ewok multipack, which I had already bought, but they did have the new Pilot set.  Using the 75% off coupon, I picked up that set and the AAT, which rang up for an impressive $8.25!

After not finding much else that was new on the Star Wars front, I looked over the Transformers offerings and found the new Masterpiece Thundercracker for $69.99.  Although I didn’t buy it then, after stopping at Target and Walmart, I ended up going back and using the $10 coupon to pick it up.  It’s an impressive piece and while I haven’t opened it yet, I’m looking forward to it.

TRU always has a good assortment of Lego sets and that held true yesterday.  They still have Harry Potter and Pirates of the Caribbean on the shelf along with the newest offerings from Star Wars, Lord of the Rings and City.  But, TRU has a decent markup on their sets so unless you’re looking for something older that’s sold out other places, hold out for Walmart, Target or even Lego Shop@Home.

Toys-R-Us still had a decent amount of G.I. Joe: Retaliation items out but nothing that wasn’t from that first wave that made the rounds of all stores.  The Marvel section was mostly a mess and although I did see two Hawkeye figures from the Avengers line, I mostly passed over that section.  I paid even less attention to the Spider-Man offerings.

Mattel was well represented on the Batman side of things, unfortunately, I think they may have overdone it on that line.

Hot Wheels had at least 3 different displays scattered around the store and while I didn’t go through all of them, there did seem to be a decent amount of product available if that’s your gig.

My second stop was T.J. Maxx, because you can never tell what you may find there.  They did have a couple Class I Fleet Vehicle sets from the Star Wars line, including the Toys-R-Us exclusive Separatist Speeder & Geonosian Warrior.  There were a few Thor toys next to some Captain America and Iron Man 2 offerings and Transformers was represented by a couple Deluxe sets.

I did find one Weapon Assault Drone figure from the Iron Man 2 line and for only $3.00, added him to the collection.

The local Target store has mostly been a bust since February and the Horseheads store was no different.  While I did spot a Clone Wars Boss figure and a couple of Aqua Droids, there was nothing to be had from the Vintage Collection or Movie Heroes waves.  Nothing on the Class I or II vehicles and the Battle Packs didn’t make up for the lack of other product.

Target did have quite a display of G.I. Joe: Retaliation toys on an end cap.  They still had both Bravo and Delta (HISS Tank) vehicles but no sign of the second wave.  All of the first wave of figures were represented, including the G.I. Joe Trooper (Tan accessories) and Cobra Commander (black).  At $9.99 I passed.

Nothing of note on the Transformers or Mavel side of things, Batman still had a decent display, including a few items on the end cap with the Joe figures.  The new Lego Star Wars display was out and so were the newest 2012 sets.

After the Pilots multipack at Toys-R-Us, my second big score came from Walmart which had some leftover Lost Line Star Wars figures.  They had both the Vintage and LL cards for Leia and Jar Jar, VC for the AOTC Clone Trooper and a LL carded ROTS Shock Trooper.  Unfortunately, that was it.  Nothing but Obi-Wan and Anakin for Clone Wars and mostly Obi-Wan and Qui-Gon for Movie Heroes.  They also had some of their exclusive Discover the Force figures, with the 3D glasses, left.

If you’re still looking for a Walmart exclusive TIE Bomber, for $30, they have one left on the shelf.  They also had the exclusive Vulture Droid and Dewback in the clearance aisle for $19.00 each.

After being so happy to find Jar Jar and Leia, I didn’t pay much attention to the rest of the store except that I noticed they had Series 8 of the Lego Minifigures out.  After picking up the two Star Wars figures I checked out and went back to Toys-R-Us to pick up the Thundercracker figure.

I almost didn’t stop at KMart but I had to pass it to get home after leaving Toys-R-Us so, why not?  Probably a good thing that I did, they had at least two cases of the Lost Line Star Wars figures on the pegs.  And the best news, they were $9.99 which, while still being a least $1 too high, isn’t out of line with all the other stores now.  I snagged the Sandtrooper and Darth Vader, both on VC cards, and also scared up a $10 B-Wing out of the clearance aisle.

The exclusive AT-ST was on the shelf for $34.99 and I even spotted a leftover Odd Ball on a Vintage Collection card.  That means that the Grand Moff Tarkin wave actually made an appearance in Upstate NY.  They also had the Class I Attack Recon Fighter with Anakin so it was good to see that around.  I’d only seen it once before at Target, coincidentally, in Horseheads.

Other than the B-Wing, I didn’t find much in the clearance aisle and didn’t see anything noteworthy as far as the Marvel, Transformers or Mattel lines go.  I was pretty happy over seeing the Lost Line so I didn’t really need anything else.

It was fun to get out and do some shopping, other than a passing stop at a Toys-R-Us or Walmart while travelling, I hadn’t been on a real toy run in a while.  Mostly that had to do with the fact it wasn’t worth the gas when Hasbro was having so many problems getting product to store shelves.

There are still a lot of exclusives left to show up at Toys-R-Us, KMart and Target for the upcoming holiday season, but it may be worth stopping at your local KMart now as they seem to be the place to score the latest Star Wars action figures.