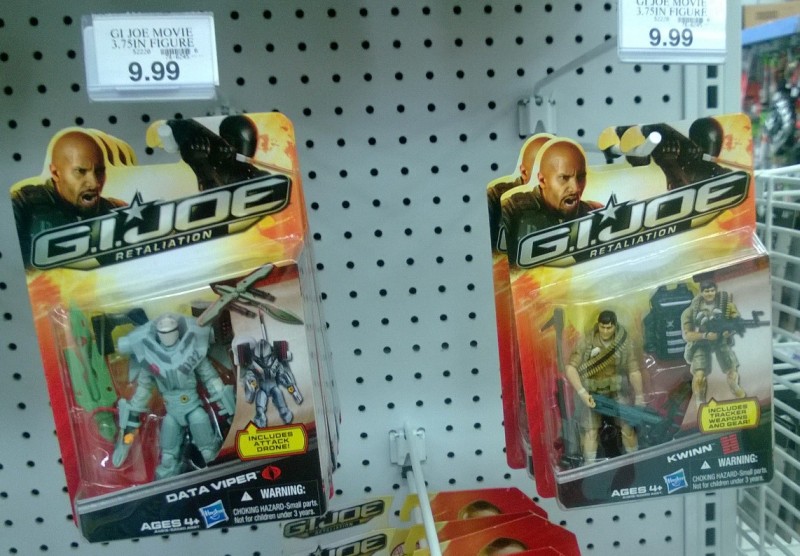 This year there’s a shorter shopping season for Christmas, Thanks Giving lands late in the month so that means stores are looking to get a jump on the normal Black Friday kickoff.

Because of that, I thought this week would be a good time to take a look around and see what the stores were getting up to.  I hit KMart, Walmart, Toys-R-Us, two Target stores, two Five Belows and two T.J. Maxx outlets.  The good news, even in the middle of the day on a Thursday, the stores had quite a few shoppers in them and there weren’t a lot of empty spots on the shelves.

I stopped in KMart with the sole purpose of picking up a couple more of the Scanning Crew packs while they were on sale.  Not only did they have an excellent selection of both sets, the Ewok Catapult was also in stock.  The rest of the Star Wars offerings were pretty standard, with a plenty of the new 5 Points of Articulation (PoA) figures and 2-packs, 12″ and plenty of Angry Birds product.

The surprise that I noticed was the second set of 3 Iron Man Marvel Legends figures: Iron Man, Iron Patriot and Ultron.  At a sale price of $12-something, it wasn’t a bad deal for those looking to complete their Iron Monger Build-a-Figure.  This was the first time I’d seen them at retail but I was also surprised to see them a second time later in the day at Target.

Hasbro’s other superhero lines, including Avengers and Spider-Man, also had a large selection while Mattel still had a decent amount of Man of Steel merchandise in the aisle.

The store in Johnson City, NY has been moving the Star Wars section, and action figures in general, further back from the front of the store for a while.  This week, the Star Wars section was the furthest back I’d seen it in a while.  It has also shrunk since the last time I was in the store.  However, the selection of stock was rather impressive.  They were fully stocked on Saga Legends and Mission Series and while the Black Series had been picked over, there were still some good choices to be had.  Black Friday will see big markdowns on the exclusive Republic Gunship and MTT and the store was well prepped with about 10 MTTs on the shelf along with a full slot for the Gunship.  The exclusive Vintage Collection X-Wing, AT-AT and Millennium Falcon were there along with the aging Droid Attack on Coronet, Yavin Pilot and Pod Racer Pilot Packs.  The new Geonosis Arena Packs were in stock along with plenty of Angry Birds merchandise.

One of the biggest surprises was finding a end cap of G.I. Joe figures and vehicles with the Kwinn wave in stock.  They were down to Kwinn, Data Viper, a pair of Ultimate Firefly figs and a lonely Crimson Guard. The new Eaglehawk was on the shelf next to the older HISS Tank and motorcycle waves as well.  Another cool find were two boxes of the blind bagged KRE-O G.I. Joe figures which were Buy One Get One 40% off along with all the other Joe KRE-O sets.

Although I didn’t mention them in the other store sections, everyone also has a decent selection of Transformers figures with the new Construct-Bots line getting a lot of attention.  Toys-R-Us had probably the best spread overall and that was motley due to their exclusives such as Masterpiece Acid Storm, Platinum Edtion Grimlock vs Bruticus and Ultra Magnus and the very impressive, but not exclusive, Metroplex.

Toys-R-Us had a whole aisle of all the superhero figures including new Thor The Dark World offerings alongside older Avengers and Iron Man 3 toys.  Spider-Man, Batman and Superman were all present with multiple lines and multiple scales to be had.  For Hobbit fans, Toys-R-Us is now the only real stop for toys from that franchise with a new battle pack being the sole 3.75″ release of the upcoming The Desolation of Smaug release.

The Lego section was full with not only the latest releases in stock but also a few older, and retired, sets mixed in.  There was a good selection of current polybag releases including the Iron Man, Robin and Ninja Turtle sets, an older Lone Ranger Tanto set and the Star Wars Mandalorian Fighter (#30241).

If Skylanders are on your holiday shopping list then Toys-R-Us should be your number one destination.  The entire themed section at the front of the store has been turned over to the interactive toys and the selection is better than in any other store I’ve seen carry the line.

I’m not sure why I bother much with Walmart anymore when it comes to Star Wars but since I was in the neighborhood I had to stop.  They didn’t have anything out of the ordinary with a handful of Black Series figures on the pegs alongside Mission Series and Saga Legends.  They did have some role play lightsabers but that’s about it.

The rest of the aisle had the usual suspects; Iron Man 3, Avengers, Spider-Man, Man of Steel and Wrestling figures.  The new Max Steele line was holding down some decent peg space and  Hasbro’s Beyblade line still seems to be popular.

Walmart has one of the better selections of Lego around and their aisle was full this week.  Nothing out of the ordinary but some sets are on Rollback but most of them are in the City theme this time around.

Neither Target store had anything that really shocked me with possibly one exception, the Vestal store had the second wave of Iron Man 3 Marvel Legends figures.  If you asked me a couple months ago if this wave would ever see retail I’d have said no.  Good for Hasbro.

The Vestal store also had something my local store doesn’t, Black Series.  Although there were two Vintage Collection figures left on the pegs, they did have the new stuff while my store does not.  Everything else was pretty standard for the Star Wars section although they did have more Class I Fleet Vehicles than I’ve seen in a while.  Locally, my store has restocked on the Class II Attack Vehicles but is anyone really buying them?

Both stores have a good stock on Hot Wheels, superhero figures, wrestling and Lego but nothing else noteworthy.

Both stores were in the Johnson City and Vestal area and both had the same stuff, basically.  Of note, both stores had late-wave Thor figures (from the first movie) for $4.  That included both Hogun and Volstagg.  Unfortunately, I don’t believe Fandral shipped with them and neither did Sif.

The elusive 2nd wave of Movie Heroes figures from 2012 had a significant presence in both stores and one of the two also had several Clone Wars figures from the Wolffe and Fox wave, but neither of those two characters.  There were also a handful of Discover the Force figures between the two stores.

Oh, and both stores had new cases of Lego Collectible Minifigures Series 11 if you’re still looking for anything from that wave.

Both stores had larger toy sections than during the summer months and that included some interesting Star Wars offerings.  Both stores had the 2011 AV-7 Mobile Cannon wave of Clone Wars Starfighter Vehicles and they were on clearance for $10 a pop.  The Vestal store only had Anakin’s Starfighter left but locally I spotted the AV-7 Cannon along with the Jedi Starfighter.

The more recent Podracer and Armored Assault Tank wave, from 2012, was in stock at both stores and for a reasonable $16 price.  There were a smattering of Saga Legends figures from 2010-2011 and the local store even had some Ultimate FX lightsabers with the best deal on the Darth Maul release at $16.

Although the second wave of Black Series figures, both 6″ and 3.75″ scales, are starting to hit retail I didn’t see them this week.  I did see 6″ figures at most of the stores even though I didn’t specifically mention it above.

The two biggest surprises were the Kwinn wave of G.I. Joe figures at Toys-R-Us and the Iron Man figures at KMart and Target.

Even though nothing else really stood out to me, I did note that the shelves in all stores, with the possible exception of T.J. Maxx, were stocked full and ready for holiday shopping.

In my opinion, for the price and selection, KMart has the best Star Wars exclusives this year but Toys-R-Us may be holding the best Black Friday sales with huge markdowns on the Vintage Collection Republic Gunship, MTT and Lego Republic Gunship.

If you haven’t been out shopping recently, and unless you’re waiting for a specific sale, I’d recommend getting out to the stores.  They’re all stocked and if you start now, you’re going to beat some of the crowds that probably won’t start rolling for another three weeks.