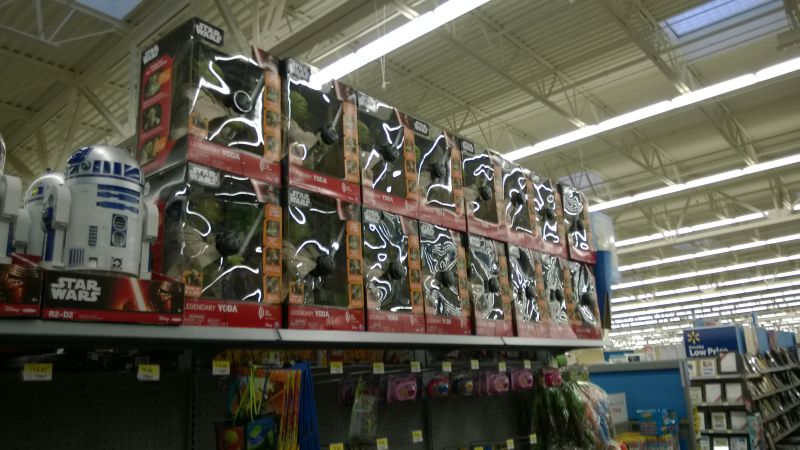 We haven’t done an Around the Toy Aisle article in quite a while; partly because there hasn’t been a lot to find as far as Star Wars toys go and partly due to shrinking toy sections at stores like Walmart.  Not to mention that with fewer toys to hunt for, we don’t always bother to get out of town to get a wider look at stores and locations.

With Force Friday kicking off the new Star Wars: The Force Awakens toy push, and several large comic movies coming in 2016, we thought we’d take a quick look around to see what’s coming up.

Obviously, Star Wars has a huge presence right now at retail with Target devoting the entire side of an aisle to not only Hasbro’s action figures but also Spin Master’s Air Hogs, Jakks Pacific’s Big Figs, Mattel’s Hot Wheels vehicles, and Uncle Milton’s science toys.  Walmart, depending on the store, has a smaller footprint but Toys-R-Us wasted no time in adding a whole featured area to many of their stores.

Lego was again a huge seller during the holiday. Our Walmart store still had some stock of Star Wars, Ninjago, Chima, and superhero sets on the shelf December 26th, but the City and Creator lines, along with the licensed Jurassic World and Scooby-Doo, were basically cleared out.  We posted the next two photos back on the 28th but thought we’d share them again to show how decimated Lego was at Target. The accompanying photos show the newly-stocked 2016 sets as they arrived on January 1st. The local Walmart hasn’t received them yet but we know some stores in PA have.  Nexo Knights, the new Lego theme for 2016, new City, Creator, and superhero sets were out and so was a Jurassic World restock.

Fans of Comic movies have several to look forward to this year but the first ones out of the gate will be Captain America: Civil War and Batman vs Superman. We didn’t grab a picture of the Marvel section, there wasn’t a lot new, but the Batman toys were stocked and the aisle reset at Target this past weekend. It won’t be long before the Captain America, and new Marvel in general, will be available.

We usually spot something crazy every time we’re out shopping. Sometimes it’s just a complete lack of toys on the shelf, leaving a huge empty space like we saw in a lot of Star Wars sections pre-Force Friday, but sometimes it’s what is there that’s baffling.  Two things stuck out to us with the first being a huge end cap full of Hot Wheels Star Wars vehicles at our local Ithaca, NY Walmart store.  They sell well, and all of the current ships were on-hand, but Target beat them to the punch on the latest wave and no matter how well they sell, can they move all of that in our local market? We’ll see. We will help them out with their Republic Gunship problem though.  The other head scratcher was at the Cortland, NY Walmart store; 32 Legendary Yoda toys from Spin Master.  We really hope they don’t have more somewhere else in the store.

Case listings for the next wave or two of Star Wars figures have been posted and there are only a couple new characters, and a handful of alternate outfits, on the horizon. Toy Fair is just about a month away and we assume we’ll see the rest of The Force Awakens figures for the year at that event. With Star Wars: Rogue One coming in December, we think there will be more of a Marvel approach to the Star Wars line from Hasbro with classic characters mixed in with new waves of current movie releases. It could be possible we’ll have another toy launch this fall but probably less midnight store openings and more street dated cases, but we’ll see.

There are a lot of new sets rumored and teased from Lego for the summer and there’s that Captain America film due. We probably won’t see anything for the Deadpool, Gambit and X-Men films but could see at least a Marvel Legends wave for Doctor Strange (did we miss any rumor’s/teases on this?).  Suicide Squad should have something out whether it’s tied into the collector lines taken up by Batman now or a standalone.

Depending on your tastes, 2016 could be a very fun year in collecting.