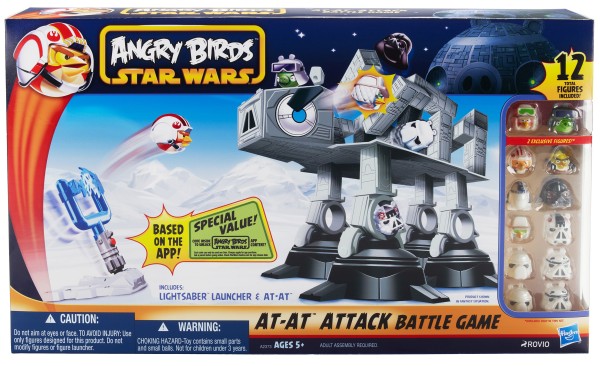 This morning there was a big event at the Times Square Toys-R-Us store where the official announcement was made for the new Star Wars and Angry Birds crossover.

Starting on November 8th, you’ll be able to download the new game from angrybirds.com/starwars.  You can head over there now for some wallpaper downoads and other preliminary content.

Hasbro, Rubie’s and Cartamundi will all be selling toys and games based on the new crossover.

Cartamundi will have a new card game and will be selling 4 different tins and each tin will have an exclusive 3D card based on the artwork for the tin.  The cards will feature Darth Vader, Luke Skywalker, Han Solo and Chewbacca.

New from Hasbro – the ANGRY BIRDS STAR WARS app comes to life! The new line of Hasbro toys captures all the launching and destroying fun of the app in physical form and features your favorite STAR WARS characters re-imagined as high-flying ANGRY BIRDS and villainous pigs!  Stack up signature STAR WARS structures and vehicles, then use your LIGHSTABER LAUNCHER to launch your ANGRY BIRDS and destroy them! Each battle game sold separately.

The Battle Games line will include:

The JENGA gaming line will feature the Death Star game and separate JENGA Launchers.  All of the releases in the JENGA line will include special codes that can be used in the Angry Birds Star Wars app to unlock new content.  The JENGA line includes:

There will be a KOOSH Jedi Slingshot and KOOSH refill 3-packs:

We know from the Idle Hands story that there will also be Rubie’s costumes and plush toys available but for today, Hasbro and Cartamundi get the spotlight.